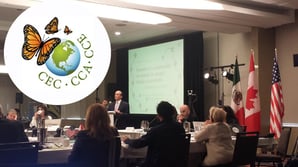 Implementing sustainable policies, be they commercial or public in nature, is all too often limited by the scope of legislative and national boundaries.

An international forum where ambitious cross-border cooperation can be fostered certainly has its merits.

The Commission for Environmental Cooperation (CEC) is that very forum. Established in 1994 through the North American Agreement on Environmental Cooperation, it promotes dialogue and the exchange of ideas between Canada, the United States and Mexico in the field of shared environmental collaboration. The forum acts as an important collaborative platform to engage issues, especially those connected to NAFTA (North American Free Trade Agreement), the accord that has facilitated free trade across the continent for over 20 years.

With the future of environmental regulation, NAFTA and sustainability in business all set to be on the news agenda in 2017, ERA eagerly attended this month’s regular session on November 7th in Ottawa, Canada to check in on the latest developments and innovative ideas.

The focus of the November session was the challenge of sustainable energy in the big picture, looking at the state of policies as they stand across the continent.

The US Presidential election was held the day after this session, but the discourse of the conference largely took stock of the fact that broader economic supply factors, that themselves influence the linked economies of the three countries, are unlikely to drastically change regardless of the outcome of that election.

For example, with energy production being such a hot topic, conversation revolved around several aspects in the current market that will not be changing overnight.

These included the pricing factor of natural gas. This fuel, being substantially cleaner than the much-discussed coal, is likely to still force its way through to consumers due to its low price.

Looking at the big energy picture, any manufacturing increasing production across the United States in particular would most likely continue to find their energy needs meet by both growing sustainables, as well as the glut of cheap, clean natural gas.

Coal, a fuel that has been much debated over the course of the election, would require a considerable change in the existing low-cost energy market in order to become in any way dominant. In this respect, the energy trend of recent years will most likely not be bucked, even with a change in the executive.

Similarly, with a great number of companies and local authorities already committed to sustainable practices on programmes on a multi-year basis, major reversal on this front is very hard to envisage. 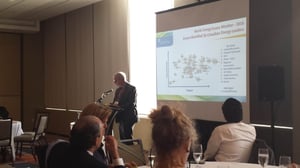 The concept of the three countries that make up the CEC continuing to present a united front, and expressing their innovations and opportunities to the globe as one, was a concept that was consistently stressed through the session.

There was a palpable sense of the CEC having achieved a very considerable degree of successful collaboration, but that this had to continue.

The continued interconnection of the Canadian and US power grids was identified as one area where even more positive collaboration could be achieved.  A presentation was given during this session by Gary Sutherland, Relationship Manager with Hydro Québec, which neatly linked into this.

Mr Sutherland outlined the size scale of the Canadian province of Quebec in relation to the eastern seaboard of the US, indicating the massive river-crossed northern landmass of the province in which hydro-electric energy is readily being produced.

This Canadian hydroelectric energy now plays an active role in powering major US cities like Boston and New York. In fact, for New York City to meet its stated (and ambitious) carbon reduction goals, there will have to be even more reliance on the clean hydro power flowing down into the States from Canada.

Already, New York as a state consumes 24% of Hydro Quebec’s overall produced electricity, while New England as a whole consumes a whopping 50%. This consumption, from a clean and reliable source, is only set to increase.

This was a crystal clear example of how continued cooperation, relying on a steady relationship with a provincial utility that is actually several decades old, can help produce new and exciting gains on the environmental and sustainability front.

Also during the session, there was marked discussion of wind power trading between Manitoba and Minnesota, a project that is set to provide over 250 megawatts of electricity to the States in 2020.

Such cross-border projects prove the mass distribution of clean power in North America is not limited to hydroelectric providers on the east coast.

Vibrant discussion also took place on the subject of energy conservation. By reducing the demand on the power grid of each CEC state via better management amongst individual companies, national targets for carbon reduction can become a lot more attainable.

One standard set that has been the subject of a lot of discussion, and real-life application, has been the International Organization for Standardization (ISO)’s ISO 50001.

This set of standards was touched upon by Graziella Siciliano of the US Department of Energy, who indicated the increasingly broad application of these useful standards.

ISO 50001 promotes a framework applicable to individual companies that delivers:

The CEC acts as a good platform on which ISO standards can be promoted, because both are international in their focus. This set of standards delivers benefits that are felt in both the financial bottom line of the company applying them in energy savings, as well as facilitating sustainability.

The application of a set of progressive and sustainable approaches was outlined at the session with an example set by 3M Canada, a technical firm that focuses on innovation.

Andrew Hejnar, 3M Canada’s Energy Manager, outlined how getting employees directly involved with energy saving efforts could bear real fruit. By taking steps such as encouraging employees to take part in energy training sessions, as well as crowd-sourcing conservation suggestions, the company has been able to achieve savings of approximately 50% in their energy consumption.

Moving Towards Sustainable Practices Can Be More Achievable Than You Think 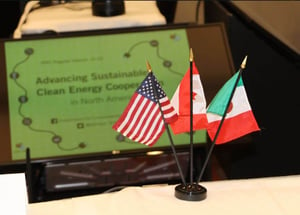 The CEC represents a massive land area, and three large countries, but it remains a single undivided geographic region. This is especially important in the context of water.

Sufficient (and clean) water remains absolutely essential in the North American sphere, for both a healthy local environment, and for robust industrial and economic activity.  The serious drought in California, itself the largest state economy in the United States, has been on-going for almost six years, and has thrown up serious challenges on the agricultural and ecological front.

The border states along both sides of the US-Mexican border will have to deal with substantial water-shortage crises in the years to come, according to projections. Better communication and strategizing between the two countries could result in major savings on both the economic and environmental fronts.

An example of a city in this border region making real strides in conservation could be seen in Los Angeles’s use of LED lights at a municipal level, a development examined at the CEC session. By opting for this kind of street illumination, the local authority was able to achieve a 50% decrease in energy consumption across streetlights.

By consuming less energy, the municipality reduces the amount of water being consumed in the region. This is due to the usual process of producing energy in traditional power plants requiring a quantity of water for every watt produced. In a drought scenario, every little helps, and conserving energy can equal conserving water.

The CEC makes for an ideal platform where these kind of issues can be foreseen and then addressed before a regional crisis appears. 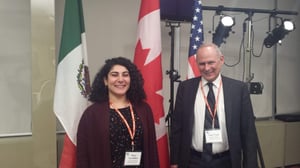 The international aspect of the CEC is its greatest strength. While the presentations given at this one day event were extremely useful and informative, the fact that they knit together the approaches and challenges from three participating countries should be recognised and appreciated.

ERA observed a common thread throughout the regular meeting. Despite some changes on the horizon in the US political scene, the need for accurate and dependable measurements and metrics in the context of on-going sustainability projects was just as pressing.

For any of the above mentioned projects to truly be assessed in terms of achieved goals, then measurement, from the minute to the massive, needs to be continually employed. Whether this is through an environmental reporting front, or in delivering energy savings, the need for high-quality measurement to take into account all the minor aspects remains.

To find out more about ERA can help you deliver more accurate environmental reporting, energy use and sustainable policies, please download the free PDF guide below. If you have any other questions, please do email us at info@era-ehs.com.