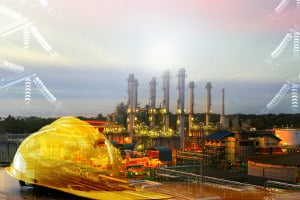 Update: May 2017: Since the publication of this article, Health Canada have issued an annoucement indicating changes to WHMIS 2015 compliance requirements and deadlines. These changes in requirements center around the timely implementation of Controlled Production Regulations (CPR) and Hazardous Products Regulations (HPR), as well as Confidential Business Information (CBI) disclosure. The annoucement can be read here.

Manufacturers, producers and facilities based in Canada will by this stage likely be keenly aware of WHMIS 2015 regulations. This is a comprehensive new set of regulations, developed to UN-approved Globally Harmonized System (GHS) standards, which cover the onsite documentation and labeling of hazardous goods in Canada. These new rules will also have a subtle impact on any US business involved in the cross border trade of these goods.

This revision of hazardous materials rules weren’t rammed through by the government. Rather than any overnight changes to existing regulations, the Canadian authorities have taken on a gradual approach. This is composed of a range of consecutive deadlines implementing WHMIS 2015. The time frame is set to stretch from May of 2017 to full compliance with the regulations by December 2018.

Now, May 31 2017 is just around the corner. This is one of the first of these key deadlines, specifying as it does the first concrete change for importers, distributors and manufacturers. 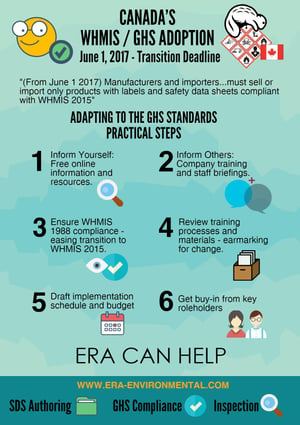 For the past year, right up until the May 31 2017 deadline, the requirement being placed on Canadian manufacturers, importers and distributors of hazardous products was simply to ensure compliance with the venerable WHMIS 1988 requirements.

This was the sole requirement that such organizations had to contend with, up to May 31 of this year.

By June 1 though, the new rules are coming into play.

The steps above are simple stepping stones that companies can follow to better position themselves for the transition.

The key changes taking place on this date are:

This largely represents the door closing on the WHMIS 1988 regulations. Importers passing on hazardous goods to the public market within Canada must transition to the new standards.

However, if goods are only to be used by the importer / manufacturer, then there is still leeway for the use of the old regulations.

This can be understood as being a considerable step towards limiting the flow of goods into the country that are not WHMIS 2015 compliant. By increasing restrictions on those companies that haven’t made any progress on GHS compliance, the slowly moving wheels of legislative enforcement will begin to make their presence felt.

Why Changes Matter for US Businesses

The devil is in the detail when it comes to the sequential deadlines of the WHMIS implementation program.

As stated above, increased scrutiny of imported hazardous goods that are coming into Canada will become part and parcel of this process.

It’s an established fact that cross-border trade between the United States and Canada is crucial to the economic well-being of both countries. These major NAFTA-integrated economies will need to pay attention when the regulations that surround the importation of goods changes.

This ultimately means that US producers of any chemicals could be putting themselves at the bottom of any list of dependable business partners, should these regulations be ignored.

These regulations are treated seriously by Canadian authorities, with the legal teeth to back them up.

In a query submitted to Health Canada in October of 2016, officials cited numerous ways in which WHMIS 2015 rules can be enforced.

“These include voluntary agreements for correction, orders to stop sale, seizure and prosecution.  In addition, measures are available to the regulatory jurisdiction responsible for occupational health and safety in the region in which the facility is located, such as directives not to use the product until corrections are made.”

Canadian importers will want to avoid these kinds of situations at all cost. In this regard US producers will need to be aware.

Given how Canadian regulations bear down on different kinds of organizations: including manufacturers and importers, distributors, and workplace employers, the slow roll out of these regulations is bound to catch some producers unaware.

The US has already committed, in 2012, to adopting GHS compliant standards; administering this through its dedicated workplace health and safety body (OSHA).

However, producers and exporters are still lagging behind. Their continued transactions with the US’s biggest trading partner, Canada, will ultimately produce more issues as these regulations come into play.

Health Canada has previously published “stepping-stone” guidelines for companies that have yet to progress towards WHMIS 2015 compliance.

While these were originally published at the very beginning of the transition process, they still represent clear and logical steps that almost any business can take – before fines start being issued by regulatory inspectors.

These steps have been outlined in the infographic prepared by ERA Environmental above.

Additionally, companies can ensure their GHS and WHMIS 2015 compliance through committing to a more robust and comprehensive SDS and health and safety documentation regime.

Chief amongst these is adopting an SDS Authoring and SDS Management system that will ensure that these vital documents, which must accompany any stored hazardous materials, are produced and maintained to a rigorous GHS standard.

Have these resources at the ready means that any exported goods, from wherever they may be globally imported from, can be covered by fully compliant SDS and labeling documents.

Delivering on such a basis is a strong way to ensure a healthier, more compliant workplace – with the correct documentation on hand in the event of an emergency situation.

For more on how the GHS transition can affect your business, or if you have any further questions, please feel free to email ERA via info@era-ehs.com.