This is the fifth and final installment of ERA's "Pitch Perfect Technique" series on the psychology behind getting executive buy in for your EH&S projects. If you missed out any part of the series, you can read them now by clicking these links: part one, part two, part three, part four. 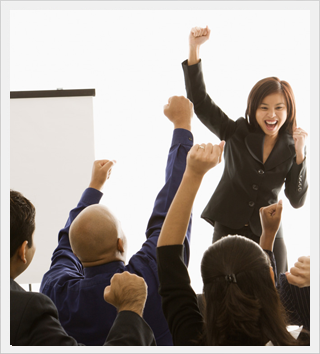 This is the final section in our mini-series, which has focused on the best method for winning executive buy-in for your EH&S idea by strategically applying the six principles of influence to your preparations and pitch.

In the previous sections we went in-depth for each of the three steps of the Pitch Perfect technique, explaining how each one hits on certain influencing principles and overcomes the major obstacles to getting the green light from your boss.

Those 3 steps of the Pitch Perfect Technique are:

What You'll Learn From this Article

This final section of our mini-series will shift the focus onto how you can apply all your preparation work to making the best pitch possible to your boss by capitalizing on the psychology at work behind the scenes. We’ll discuss:

Understanding the Psychology of Busy People Like Your Boss

Your boss is a busy person. She or he probably fields hundreds of emails and phone calls a day, all asking them to say yes to something.

Even just because of the sheer volume of requests and demands they are presented with on a daily basis, they end up saying no to a lot of ideas, even good ones.

Psychologically, a busy person, like most executives, knows that saying yes to any type of project will simply increase their workload. And saying no to anything unessential means that they won’t have to get any busier.

And a lot of the time people get a no from their boss it’s because those people making requests aren’t communicating them in the right way.

There’s a right way and a wrong way to make a request of a busy person in person and in emails, and it takes the psychology of being busy into mind. You just have to keep in mind these two rules:

Rule #1: Make it as Easy as Possible to Say Yes

The easier you make it for your boss to say yes to your request, the more likely they’ll take the time to do it. Your audience shouldn’t have to do anything in order to say yes or help you get closer to achieving your goal.

For example, if you want to talk with your boss about your idea, your request should sound something like: “I have an idea that will save the company money. Can I set up a meeting time with you next week to talk about it? I will contact your secretary to find out when you are available.”

This request requires only a quick yes response from the audience. It doesn’t ask them to dig through their schedules, or to set up the meeting themselves. All they have to do is say yes – no work involved.

The clearer your call to action is the better. If there’s any guesswork involved in saying yes (“what are they asking me to do?”) then you’re less likely to get the go-ahead.

Think of it this way: your email or request should have just one goal – to make it as easy as possible for the boss to say yes.

Rule #2: Recognize that the person is busy and don’t waste their time

Demonstrating an understanding that your boss already has a lot on your plate and is taking precious time to listen to your request or read your email is a good way to get their attention an build up your likability (one of the 6 principles of influence).

Do this by keeping your request short and to the point. Don’t ramble, and don’t be at all vague about what you want. Your pitch should be as short as it can be without missing out on vital information, and you shouldn’t go off on any tangents.

Another important way of showing you respect the boss’ time is to make sure everything happens at their convenience rather than yours. Meet when and where they are free to meet.

A common mistake environmental project managers often make when trying to get executive buy-in is being overly deferential. While you should be respectful of their time, you should also go in to any request from the perspective of a Subject Matter Expert who knows their idea is worth the executive’s time. A simple “thank you for meeting me” will get your message across and won’t take any more time than necessary.

Remember, the more you show (rather than tell) respect for how busy your boss is, the more likability you will have.

Employ the Art of Listening

If you’ve followed the Pitch Perfect Technique, your pitch should be concise, focused on the Bottom Line and the benefits that your executives will care about, you should know your topic inside and out so that you can answer any technical questions with confidence, and you should have a strong support system of case studies and testimonies at your disposal.

But there’s one more important step that you must include if you want to get the green light for your environmental management project from your boss: solicit feedback and listen to it.

Before you ask for the final go-ahead from executives, you need to ask them for their advice on the matter. That’s because it amps up the reciprocity and consistency principles of influence.

In other words, it makes the project feel more like their own and gets them to buy into it just a little by making suggestions that they would like to see or know more about. It gets them psychologically invested in the project in a way that shifts their thinking from no to yes.

It turns out that listening to someone is the best way to convince them. In a Trusted Advisor article about the principles of influence, Charles H. Green writes that asking for feedback is the way you transform your pitch into a dialogue about your idea – one that is centered on getting to yes instead of avoiding a no. Unlike a simply yes or no question, a dialogue makes it more difficult to simply say no to an idea, so use this to your advantage.

You want your boss to have questions or comments about your idea, because that shows they are willing to put their own time and work into the environmental project.

Asking for feedback and leaving time for questions also allows you to work through tiny concerns with your boss before those concerns turn into major pitfalls down the road. The key is to not get defensive or take any concerns they have personally. It’s your job to be professional and use your expertise to reassure them.

And because you’re opening up a dialogue with your executives, you should expect to hear several smaller scale yeses before you get the ultimate green light. After your initial pitch, which will take the most work, you might get told that the idea sounds good and they want you to investigate a few of their concerns and come back to them in a week.

The important thing to remember is that each of these small yeses is a step closer to that ultimate executive buy-in. And with each yes you get, the consistency and authority of your pitches will increase, since the executive class will be buying in little by little and trusting you as the SME.

Depending on the scale and scope of your environmental project, you might have to go through several pitches before you get the final yes. Each time you present, however, you’ll be increasing how much influence your idea has, so don’t feel like you’re stuck on the corporate treadmill.

Keep this important fact in mind: as long as your boss is talking about or asking about your project, they aren’t saying no. Create an environment in which you listen to them and keep the dialogue going.

Be Prepared to Hear “Yes”

Once the question and answer period is done and everyone has had a chance to discuss their concerns and perspectives, it is time for you to try and close the deal.

When asking for the final green light, you should have a clear plan of your next steps laid out so that the boss knows exactly what her or his OK will mean. In some cases, the boss may have a specific timeline or next steps they want you to take, which means they’ve already bought into your idea.

The key here is not to get caught off guard by their yes and have forgotten to plan for the next steps. You should go into your pitch expecting the go-ahead and know what to do after that.

Even if you are positive that your EH&S project idea will save money and time for everyone, there is never a guarantee that you’ll get buy-in from your executives.

There may simply be things out of your control that are stopping your executives from saying yes. Maybe they know about something happening in the next two years that would affect your plans. Maybe there just isn’t the start-up money needed to get your project off the ground, even if it would save money overall in the next 3 years. There is any number of reasons that you can’t do anything about.

Hearing no from a boss can actually be a golden opportunity to learn about how to get your project approved at a later time, to identify the pain points you need to resolve in your next pitch, or to discover another project that will be more likely to get the OK.

Try taking this approach if you ever hear no from your boss:

Listen carefully to the reasons your project didn’t get executive buy-in, because there is often many clues about what you should do next. Did your boss reveal that there is another pain point they think is more urgent? Did he or she express interest in some aspects of your project but didn’t think it worked as a whole? Did they seem to be more interested in another type of EH&S project and tried to steer your ideas in that direction during discussions?

All of those leads are well worth pursuing and they will already have a certain level of executive buy-in built in. You may very well have another (and even better) environmental project in the works in a short time. Or, as business writer and speaker Scott Berkun, says in his article about pitching, consider splitting your idea into smaller pieces that will take less time and effort to implement and eventually build up to your end result over a longer period of time.

If your original environmental management project didn’t get the green light because of some larger objections like cost or a low ROI (Return on Investment), you may just want to take a few months to investigate all the ways you could improve your idea for the next time around. There’s no reason why you can’t attempt to re-pitch your idea later, if your boss will hear it.

Remember, getting an EH&S project approved is a process that can have many highs and lows, including a some yeses and some nos. Few to none environmental projects get executive buy-in the first time they get pitched, and hearing a yes will require you to be flexible enough to overcome the small rejections.

This Series in Review

We’ve covered a lot of material in this mini-series, starting from the moment you think of your EH&S idea to the moment you finish pitching it to the boss. Here’s a quick summary of what we talked about: